Brussels, 26 October – The 12th Pulse Check survey edition shows that despite optimisation of production costs and other short-term measures, 23% of suppliers expect to record losses this year. For 2023, the outlook is gloomier still with 27% expecting a loss. The concern is reflected in the general sentiment towards the future: 70% of respondents report a negative outlook, significantly up from only 18% who felt this sentiment in the Fall of 2018.

“The Pulse Check clearly documents the pressure that automotive suppliers are facing which may turn worse during winter. With nearly 70% of the suppliers operating far below EBIT margins of 5%, the financing of the green and digital transition is becoming increasingly challenging. Suppliers hold strong to their commitment to R&I spending, but without access to affordable energy in the EU and fair sharing of the burden from inflation along the supply chain, competitiveness and the speed of innovation in the sector will diminish”, says CLEPA Secretary General Benjamin Krieger.

This outlook stems from ongoing difficulties combined with looming threats: 96% of suppliers report a significant profitability impact from energy costs and potential shortages. Raw material inflation is affecting 85% of suppliers, while semiconductor shortages continue to have a significant impact on the profit margins of 65% of the suppliers surveyed.

A key challenge in the industry is fair burden sharing of increasing costs. Around 80% of suppliers receive no or limited compensation from vehicle manufacturers for rising energy and freight costs or supply chain disruptions, while 42% struggle to get compensation for raw material costs. 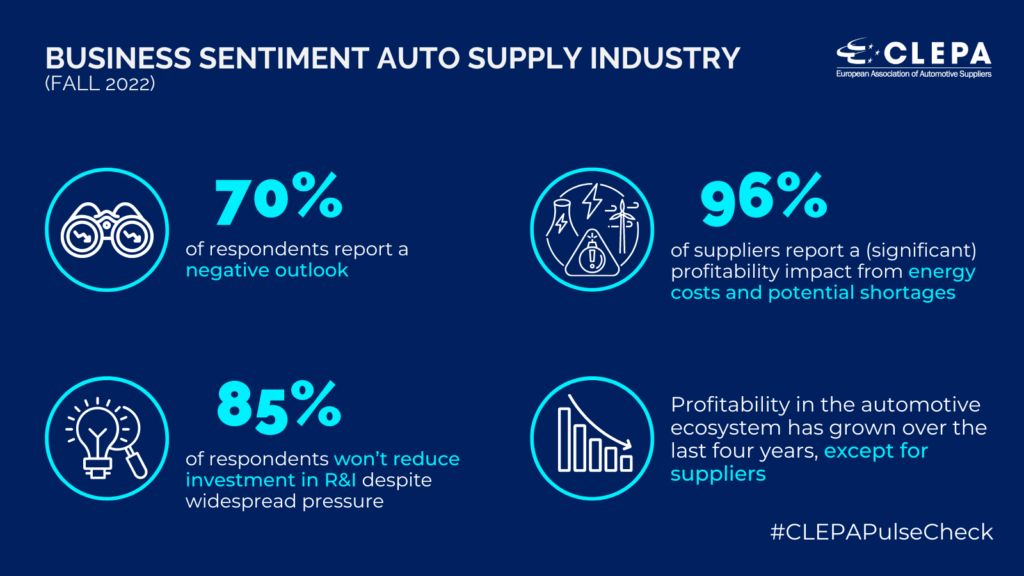 The limited ability of suppliers to pass on prevalent production cost increases is very critical for many – some even fear bankruptcy of smaller suppliers or suppliers moving to adjacent industries – putting at risk the integrity of the whole automotive ecosystem. Despite widespread pressure, 85% of respondents will not reduce investment in R&I to compensate for losses, showing that the commitment of the automotive supply industry towards new mobility solutions remains strong. The question then becomes – for how long this will be sustainable – given the current economic outlook. Reducing investments in innovation would severely undermine the mobility transition, as well as the sector’s long-term competitiveness and growth.

Looking at the entire automotive ecosystem, in the last four years, suppliers are the only ones registering decreasing profitability margins along the value chain, while OEMs, Retail and Aftermarket recorded significant improvements in profitability between 2017 and 2022.

For more details on automotive suppliers financial performance in the first half of the year, please also refer to the last edition of the CLEPA Data Digest.

Note to the editor

CLEPA, the European Association of Automotive Suppliers based in Brussels, represents over 3,000 companies, from multi-nationals to SMEs, supplying state-of-the-art components and innovative technology for safe, smart and sustainable mobility, investing over €30 billion yearly in research and development. Automotive suppliers in Europe directly employ 1.7 million people in the EU.

CLEPA, in cooperation with McKinsey who aggregate the data, surveys the full membership twice a year to measure outlook and sentiment of the industry.

You can contact CLEPA’s Head of Strategic Communications Filipa Rio.