A survey of automotive supplier companies in Europe to gauge the impact of the COVID-19 crisis shows that the sector’s outlook has worsened considerably over the past weeks.

Over 90 percent of businesses expect a drop in revenue in 2020 of at least 20%, up from 60% in March. 35% percent expect a reduction of more than 30%. Profitability will take an even harder hit, with more than half of respondents now expecting to make a loss before taxes. The perspective of a quick recovery worsened significantly as well. Three out of four businesses fear that it will take more than a year to recuperate, whereas 4 weeks ago the consensus tended towards 6-12 months. One third of respondents counts with a timeframe of 2 to 3 years.

CLEPA, the European Association of Automotive Suppliers, surveyed its membership between April 27 to 30. The input was aggregated by consultancy firm McKinsey this week. 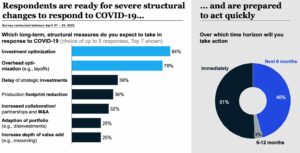 Volatility of demand is considered the most critical issue for the automotive supply chain at the moment, with almost 90% of respondents ranking this topic their number one concern. Often, also, production restarts at very low levels. This makes fixed cost rocket compared to turnover. The further outlook depends very much on demand for vehicles and, hence, for automotive components picking up substantially. In this light, CLEPA together with the other European sector associations representing the automotive value chain, has urged governments to launch EU-coordinated vehicle renewal schemes to kickstart economic recovery and support the relaunch of the sector.

To cope with the crisis, a large share of businesses (84%) plan to cut investment and reduce workforce (78%). Almost 40% have already taken steps to cut R&D budgets, with 32% undecided and 30% at this stage decided against. Automotive suppliers are among the largest private investors in R&D, contributing significantly to the competitiveness of the automotive sector in Europe. Revision of manufacturing footprint is also considered.

Half of respondents plan to adjust investment and workforce already in the short-term. The remainder foresees such measures to be taken in the next 6-12 months. To date, the jobs of more than 1,1 million Europeans employed by vehicle manufacturers are affected by factory shutdowns. The wider automotive employment impact is even more critical: the general multiplier counts with 3 jobs in the immediate supply chain and another 3 for the value chain further down the line.

Health and safety on the work floor remains a matter of high priority both during and after the ramping-up of production. 85% of respondents indicates to be well prepared and apply proactive risk mitigation measures. Personal protective equipment (PPE) is seen as the main measure applied on the shop floor, with usage expected beyond the next three months. Distancing measures and decoupling of shifts are widely applied as well.