The EU’s Green Deal will shape the future of Europe’s manufacturing economy. As such, its role in the automotive industry should be part of the conversation. With this in mind, CLEPA, together with EUROBAT, and hosted by the European Forum for Manufacturing (EFM) held an online debate on the topic of the Green Deal and Electromobility, bringing together policy makers and heads of industry to discuss how best to strike a balance between promoting climate ambition and preserving economic development.

The focus of the debate was the desire to bring some clarity on the needed regulation to achieve Green Deal objectives in a reliable yet ambitious way, while taking into account a wide variety of technology solutions. 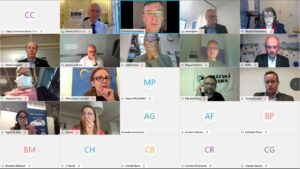 As key note speaker, European Commission´s Head of Unit Circular Economy & Green Growth, Mattia Pellegrini emphasised: a stable regulatory framework is necessary to allow Europe’s automotive industry to focus its efforts over the long term. It can also assuage uncertainty with consumers, hopefully preventing adoption delay. He also shared his views on the future of electromobility as an integral part to achieving the EU’s goals on decarbonisation.

Industry representatives highlighted the challenge of meeting customer needs in the short term while at the same time making large investments into the technologies that will decarbonise the mobility sector. They emphasised their strong support for the objectives of the European Green Deal, which align with their own objectives to unlock technology pathways on the road to carbon neutral emissions.

The role of batteries as key element to also decarbonise other sectors was discussed. The need for a shared vision and research and innovation strategy on future of batteries and for the regulatory requirements is pivotal, in order to attain full potential by guaranteeing future competitiveness of the European battery industry across all markets, without neglecting the need for a full battery supply chain in Europe hand in hand with a hydrogen strategy, and partnerships for R&D funding.

Furthermore, the need for achieving European leadership on battery development and production was mentioned as one of the top priorities. Several important actions are being taken in Europe to support the role that battery technology should have in terms of sustaining economic growth, creating jobs and contributing directly to achieving the Green Deal targets.

A key aspect on the upcoming regulations on batteries which was shared repeatedly throughout the debate, particularly by industry representatives, was that with the EU’s focus on recycling, regulators should handle the challenge of setting sustainability requirements with care. Automotive and battery suppliers are contributing to the circular economy by remanufacturing components, reducing waste, prolonging the service life of the vehicles and also by having a strong track record of collection and recycling of batteries, therefore the use of secondary materials needs to be handled with care.

Several Members of the European Parliament from across the political spectrum also participated in the discussion, mainly from the Committee on Transport and Tourism (TRAN), the Committee on Industry, Research and Energy (ITRE), and the Committee on the Environment, Public Health and Food Safety (ENVI). Among the expressed views, the need to keep investing and researching on batteries and include this as part of an European industrial strategy was emphasised.

The hope was set that policy makers will aim to strike the right balance between steering the EU through its current “ecological transition” and not stifling innovation by supressing certain technologies. While batteries were the key discussion focus in connection with the topic of electromobility, the point was raised that we should be relying on a variety of technological developments, including the internal combustion engine, to be able to successfully attain environmental and economic sustainability.

In its working remarks, CLEPA Secretary General Sigrid de Vries and David Storer, Director of R&I and New Mobility highlighted the role that transport plays in society. They emphasised that upcoming policies should guarantee future accessible and affordable mobility for all, as well as the need of preserving the European competitiveness, advanced technology competence and autonomy while securing the EU’s high value industrial base and employment.