CLEPA, the European Association of Automotive Suppliers, today launches the Automotive Employment Footprint Portal to provide insight into the impact of the green transformation on employment and manufacturing along the automotive value chain, to offer viewers a journey into the challenges and opportunities presented by the shift, illustrating reality behind the numbers. The Portal provides access to the findings of more than 15 recent studies performed by independent research bodies, each examining diverse scenarios in the accelerating green technology uptake, the direct correlation with employment needs, and the outlook across Europe

“A successful transformation starts with knowing the stakes”, says CLEPA Secretary General Sigrid de Vries. “A close look at the available data shows two things: the green transition will affect millions of livelihoods in a very uneven way. There will be major job opportunities, but often for different people, in different places and at a different time. Second, the data confirms that policy choices hold the key to avoiding a breakneck scenario. An ambitious, efficient and inclusive green transition requires technology openness, providing room for hybrid solutions and renewable sustainable fuels. This is the approach that automotive suppliers urge policy makers to take.”

The Portal offers a visual and interactive journey along the entire mobility value chain, including the more temporary opportunities provided by the need for new digital and physical infrastructure, the upgrading of the energy grid and installation of charging and refuelling points, as well as the opening of new battery plants. A spotlight on key regions showcases how the automotive industry is contributing to local economies, as vehicle manufacturers and suppliers typically form strong regional clusters in the production of vehicles and key components.

“The automotive industry is fully engaged in the transformation and, together with regional parties, trade unions and academia, is bringing a massive re- and upskilling effort on the way to keep people on board and deliver the competencies required for the new age”, adds De Vries. “The existing data shows the magnitude of the social dimension of the transformation and the high range of uncertainty. To manage the transition, we will need more knowledge than can be provided by a macro-economic modelled impact assessment. An even closer look underneath the surface will be crucial to support the sector’s ability to maintain employment and invest in reskilling and innovation.”

The CLEPA Portal will be extended with further information after the summer. 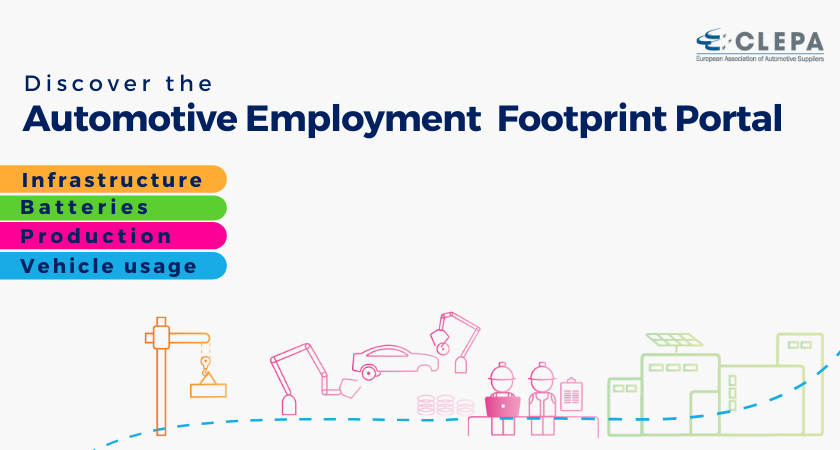 A wide range of studies have looked at the impact of electrification on employment, often with highly contrasting outcomes. Differences in the assumed pace of electrification and considered production activities explain most of these contrasting findings.  The overview in the Portal illustrates that the pace at which battery electric vehicles will win market share is likely to determine the number of jobs at risk, while plug-in hybrids fulfil both a technological and social bridge function.

The automotive sector presently supports 6% of the total active population in the EU. For comparison: the coal transition, generally recognised as dramatic, affects 0.015% of European jobs.

Automotive suppliers directly employ 1.7 million people, on top of the 1.2 million in vehicle manufacturing . Another 370 thousand work in manufacturing sectors deeper down the value chain, including steel and other materials, and another 3.2 million are employed in services related to vehicle use.

Direct automotive job creation in the battery, software and electronics supply chain is on the rise, but will not be able to compensate for the jobs disappearing in powertrain related areas in neither numbers or the type of work nor in terms of timing. Close to 1 million people have a job directly linked to the production of vehicle powertrain technology. An estimated 50,000 jobs will be created in battery cell manufacturing and integration,where research suggests that up to three times that number could be created in the production of the chemical components of batteries and the critical areas of thermal and system management of the battery.

The electrification of cars will have a significant impact on the need for labour in the production of parts, systems and the assembly of engines and vehicles. The powertrain is the most labour intensive part of automotive manufacturing, representing 30% of the value creation. A battery-electric powertrain contains 60% fewer components than needed for an internal combustion engine vehicle. At the same time, up to 70% of the value of a battery cell produced in Europe is imported and this will not improve dramatically towards 2030.

Understanding the battery supply chain and the significant value creation in the material input of batteries is critical to understand employment opportunities related to the transition. The battery represents between 30 and 50% of the value of a battery electric vehicle; 70% of the value added is generated in the production of the cells and only 30% is generated through the integrating of cells, thermal management, the battery management system, and battery box. The European employment opportunities in the battery sector lie deeper in the battery supply chain, as battery cell plants are highly automated. Maintaining the competitiveness and investment capabilities of European industry and the availability of highly skilled workers will be critical to ensure that these opportunities are captured.

Most job losses in the run-up to 2030 will be among skilled workers, whereas new jobs in, for instance, battery manufacturing, will on average require a higher education profile. People will be needed in different business areas of vehicle manufacturing and supply and will require different levels of training. This transition is already well underway. In Germany, employment increased by 10% (15% for suppliers) in R&D and 34% in IT and remained stable at +2% in manufacturing activities between 2015 and 2019. Employment in the latter category is likely to fall in the coming years.

Road traffic indirectly creates work for around 700 million construction workers that build and maintain highways, roads, bridges and tunnels. Electrification will create jobs in the next ten years related to the installation of charging infrastructure, expansion of grid and renewable energy production and the construction of new battery plants.