Vavassori: “Use all available technology to decarbonise the planet” 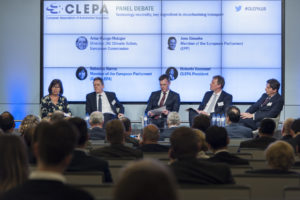 CLEPA president Roberto Vavassori asks to refocus the debate on CO2 emissions from cars and commercial vehicles: “The objective is to decarbonise the planet. It is important to move away from a tribal approach of being either in favour of combustion engines or of electrification. Instead, we should use all available technologies that serve to reduce emissions.” The statement was made at the CLEPA 2018 Policy Debate, during the panel-discussion on the proposed CO2 targets for cars and vans post 2020. The event was organised by CLEPA, the association of the automotive suppliers, with an audience of over 200 participants from EU institutions, industry and civil society.

The automotive supply industry has a key position as the provider of technology solutions for safe, sustainable and smart mobility. “Electrification is one of these solutions but not the only one,” explained Vavassori. “It would be unwise to force electrification on the complex variety of transport needs, whereas other solutions may be better suited.” The legislative proposal on CO2 currently debated in the European Parliament and Council risks a bias towards battery-electric vehicles. Instead, the emission reduction potential of all available technologies should be rewarded, and the potential of low and zero carbon fuels considered.

The panel, composed of two leading MEPs in the debate on the CO2 file in the European Parliament’s ENVI committee, Rebecca Harms (Greens/EFA) and Jens Gieseke (EPP), as well as Artur Runge-Metzger, Director at the European Commission’s DG CLIMA, exchanged arguments on a broad variety of aspects. Panellists take the potential impact of the legislation on jobs seriously, however conclusions differ: while Mr Gieseke warned of a programme for exporting jobs to China, which is strong in the production of batteries for electric mobility, Ms Harms and Mr Runge-Metzger expressed the concern, that technological leadership may move to China given their political ambition for electrification. Mr Vavassori urged for policy makers not to decide on technology but to let the market decide and wished for a technology neutral regulatory framework that rewards efficiency in reducing emissions.

Reflecting on the Policy Debate, CLEPA Secretary General Sigrid de Vries, reminded the audience as follows: “The Commission’s proposal is seriously ambitious, it will contribute substantially to the Paris commitments and drive change in the automotive landscape.” She urged to manage this transition well, in order to avoid disruption and loss of employment especially amongst small and medium enterprises. She concluded: “Simply put, it is not a question if to reach the targets, the important question is how.”

The afternoon’s key-note speech was delivered by the European Commission Deputy Director of DG MOVE, Maja Bakran, who highlighted the EU’s strategy towards sustainable mobility. This included the announcement of the so called third “Mobility Package” that will be presented early May and will include further proposals to address Europe’s transition to a low-carbon economy and the strategy for low-emission mobility.

Impulse presentations then focused on European cities’ policy strategies (Ms Dorthe Nielsen of Eurocities) for reducing pollution and congestion. as well as the technology solutions to achieve those (Dr Otmar Scharrer of Mahle and Mr Michael Kopka of 3M).

The Policy event was followed by the CLEPA Annual Reception, opened by Mr Antti Peltomäki, Deputy Director General, of the European Commission’s DG GROW, who highlighted the importance of the European automotive industry for the EU economy and employment. He underlined that Europe needed to keep investing heavily in innovation, “being a bit behind compared to other regions” but ultimately confirmed: “We don’t want to pick winners, we support technology neutrality”.

Participants also had the opportunity to visit the mini-exhibition where CLEPA members presented their latest and future technologies and products in the fields of mobility and environment.