The third G7 Global Auto Parts Industries Associations meeting was held on May 22, 2019 in Yokohama, Japan on the occasion of the Automotive Engineering Exposition Yokohama 2019. G7 is composed of seven major auto parts industry associations from the major vehicle production countries and regions: Brazil, Canada, EU, India, Japan, Mexico, and the USA. The following executive director level personnel of each association attended the meeting.

(Alphabetical order by association except sponsor of the meeting JAPIA): 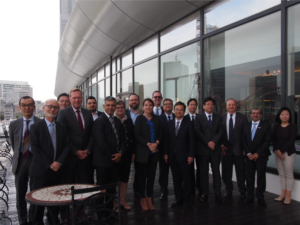 The following main issues were discussed in the meeting:

Among the issues above, the centre of the discussion was on politics, trade and EV conversion. Regarding trade issues, the impact of US policies on countries and regions such as the USMCA’s movements, the president Trump administration’s policy not only to China, but also to the rest of the world was debated.

On the other hand, regarding EV conversion, although the sales share of EV in each country/region is still small, the necessity of a regulatory framework along with the expansion of the penetration was discussed. The possibility of setting a unified position as the G7 group in the future was also talked about on this matter. They also agreed to continue watching China’s movement which is remarkable for promoting electrification.

Moreover, all participating leaders agreed to continue to exchange opinions and to share information while strengthening cooperative relationships in order to keep and enhance global supply chains.

The first G7 meeting was originally proposed by Mr. Steve Handschuh, the former President & CEO of MEMA, and was held in Las Vegas in January 2017. The purpose of the meetings is to share the challenges faced by auto parts industries in each country/region due to globalisation of suppliers, explore ways to mutually cooperate among organisations, and have shared information be utilised in the global strategies of each member company. The second meeting was held in Geneva and hosted by CLEPA last year. The next meeting will be held in February 2020, at the timing of the 15Th Auto Expo 2020 in India.

(Alphabetical order by association except sponsor of the meeting JAPIA)

MEMA – The Motor & Equipment Manufacturers Association of the U.S.A.