Key presence of automotive suppliers at the CES 2020

Since their creation, subsequent mass production and global usage over the last century, cars and other motorised vehicles have certainly evolved. However, developments have not been as widely innovative and uprooting as the changes the mobility sector is encountering in these last decades or so. The automotive industry is undergoing a deep transformation, and this was a major feature again at the Consumer Electronics Show, commonly known as CES, that opened its doors on January 7th in Las Vegas, and where smart mobility has taken centre stage since a couple of years.

With over 4,000 exhibiting companies, CES is considered the global stage for innovation gathering technologies from all over the world. In 2020, European automotive suppliers have once more delivered powerful immersive and connected experiences.

Read below to know more about the activity of suppliers at CES:

“Mobility is at a turning point. Connected vehicles, autonomous driving, ride-sharing and electrification will radically alter what we want and expect from time spent on the move. […] 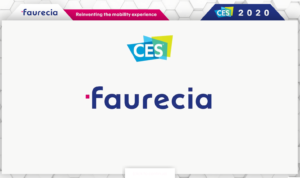 Explore the key experiences we are sharing at CES 2020 integrated into both interactive demonstrators and vehicles on the road:

“The upshot: the industry is in the midst of its adolescent years, where change can occur suddenly, causing confusion and awkward encounters. It’s a time when others develop far faster than their peers.

[…] The new product was introduced as a reference platform that automakers and suppliers like Continental and ZF would be able to use to bring more sophisticated automated driving features — not full self-driving — into their production vehicles.

‘The idea of full autonomy went a bit behind the curtain in 2019 and ADAS took more of center stage,’ Jeremy Acevedo, senior manager of insights at Edmunds told TechCrunch in a recent interview…”

“Sometimes it’s the simplest things inside that car that deserve a rethink. Bosch certainly thinks so, bringing the humble sun visor right up to date with its Virtual Visor technology. The visor is made from an LCD panel connected to a driver-monitoring camera. The camera uses AI to work out where the driver’s eyes, nose and mouth are located so that it can identify shadows on the face. An algorithm then analyzes the driver’s view, and then darkens just the section of the display needed to shade their eyes, leaving the rest of the screen transparent and thus no longer obscuring their view…” 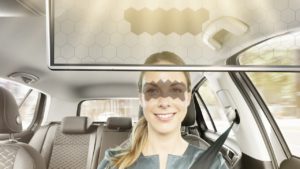 Bosch is rethinking driver safety and comfort, bringing one of the most overlooked interior components into the spotlight, the sun visor. The sun causes twice as many car accidents as any other weather-related condition due to temporary blindness. […] The traditional sun visor is not equipped to adequately address this safety concern. At best, it blocks some of the sun from your eyes but along with it, some of your view is blocked as well…”

“Tier 1 suppliers, the big boys such as Visteon, Continental, Bosch, Magna, and Aptiv, are integrating lots of small modules into a couple of uber-modules, or domain controllers: one for safety, one for infotainment, one for the engine room. That reduces the amount of wiring in the car. There are still connections, but only sharing as much data as necessary, between say infotainment and the safety modules. The telematics modem has to provide in-car Wi-Fi and also has to call for help in an accident, which are separate domains…”

“Sony has surprisingly presented their very own prototype of an electric car at the CES, though the electronics giant has been keeping any production plans to themselves. Sony’s electric limousine named Vision-S is based on a specially developed electric car platform for which international suppliers were involved.

The Canadian-Austrian contract manufacturer Magna Steyr, as well as the well-known technology & automobile suppliers Benteler, Bosch, Continental and ZF all contributed to the development. 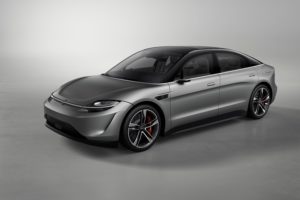 However, Sony did not disclose which components come from which supplier – Bosch, Continental and ZF all have electric drive know-how, but also experience with assistance systems. Companies such as chip manufacturers Nvidia and Qualcomm, as well as Blackberry, Elektrobit, Gentex and Here were also involved in the development of the Vision-S…”

‘Sony’s electric car is the best surprise of CES

[…] Sony could have just shoehorned bits of all this technology into a static concept vehicle. But the company figured the best way to prove to automakers and other industry players that it was serious was to fully embrace the challenge of building a working electric car.

‘Through the process of building the prototype, we started to learn a lot about the architecture of the vehicle, we started to think about how our other technologies could be implemented in a vehicle,’ Yuhei Yabe, the general manager of Sony Corporation’s AI and robotics business group, said in an interview…

“A collaboration between audio company Sennheiser and Continental has resulted in a sound system that needs no speakers. Instead, specific surfaces throughout the interior of the vehicle are used to create sound, taking inspiration from classical music instruments. 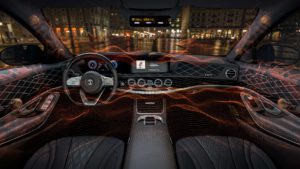 Already chosen as the Best of Innovation in the CES 2020 Innovation Awards, Bosch’s Virtual Visor is said to be a sun visor fit for the future. Instead of traditional materials, the Virtual Visor uses an LCD screen fitted with a camera to monitor the driver or passenger…”

“Continental is using the Consumer Electronics Show here in Las Vegas this week to present its vision of the mobility of the future along the megatrends of networking and automated driving. The supplier’s focus is on the connected car and “the entire living space of mobility in the intelligent city of tomorrow.

[…] we are presenting numerous innovations that reflect the two major trends of the automotive industry: Connectivity and Automated Driving. Mobility is a basic human need and a healthy mobility ecosystem fuels our society, our economy and our world. As a technology leader, we play a key role in this ecosystem by engineering safe, secure and responsible technologies that move people, goods and information to sustain our work, our health and our future…”

A few highlights from the company include its new vehicle-contact sensor, its EasyMile CuBE human-machine interface, the next generation of its 3D center-stack display and keyless vehicle-access technology.

‘This is the largest transition or change process this industry is going through since the industry was born,’ Setzer said…”