European Commission President Jean-Claude Junker and U.S. President Donald Trump agreed yesterday to work towards strengthening the bilateral trade relationship, including the elimination of tariffs as well as reducing non-tariff barriers to trade and subsidies. 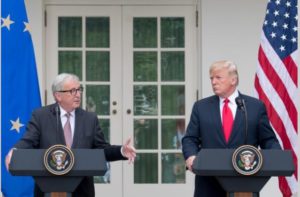 Roberto Vavassori, President of CLEPA, the European automotive supplier’s association comments positively on the results of the meeting:

“It is very positive to see the U.S. and EU talking constructively again. The comments by Presidents Trump and Juncker are promising, specifically that both sides agree to hold off further tariffs and to reassess existing tariffs on steel and aluminium in the context of negotiations. The words from President Trump about resolving the steel and aluminium tariff and the retaliation of tariff are of special importance for our industry.

The announced dialogue on standards would be crucially important for the automotive industry where high standards of vehicle safety, environmental performance must be maintained, supported by convergence between our two different regulatory systems. CLEPA positively encourages both sides to revisit the chapters already included in transatlantic trade negotiations, including existing tariffs on cars and car parts.

It is important to note that even a reform of the WTO seems to back on the agenda. Challenges such as intellectual property theft, industrial subsidies and the conduct of state-owned enterprises are best dealt with in the framework of multilateral rules.

The EU and the U.S. combined are the most important markets in the world and of crucial importance to the automotive industry. We have always supported talks to facilitate trade between the two partners and will continue doing so. We hope that the meeting between President Trump and President Juncker marks the start of a renewed and lasting dialogue and constructive negotiations.”