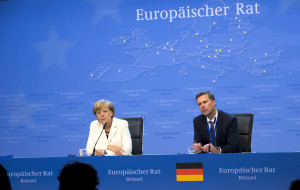 Brussels – A week before the start of a Brussels summit on climate goals, member states disagree on various points of the so-called climate and energy policy framework for 2030.

During the summit, government leaders will try to agree how the bloc’s 28 countries will counter climate change.

On Monday (13 October) the general secretariat of the European Council sent its draft conclusions to the member states.

In the comments on the draft conclusions member states wrote this week the disagreement appears largest on targets for energy efficiency and on which share of energy consumed in the EU should be from a renewable source in 2030.

Cyprus and the United Kingdom commented that they do not want any target for energy efficiency improvement.

At least seven mostly central and eastern European countries want 25 percent, while at least 12 agree with the draft conclusion’s 30 percent. Denmark wants the final text to say “at least 30 percent”.

There is also disagreement on whether this efficiency target should be binding or “indicative”. Only six of the 22 leaked member states’ positions stated they wanted a binding target, but only at EU-level.

A similar spectrum of opinions on the binding issue exists for the renewables target. The European Commission has proposed a 27 percent increase in efficiency and most member states seem to agree.

But whether the target should be indicative, binding on a European level or binding on a member state level, is not yet agreed.

A handful of member states want the aim to be “at least 27 percent”, while Germany and Denmark want a 30 percent target.

The draft conclusions say that a “reformed Emissions Trading System (ETS) will be the main European instrument to achieve” an EU target of 40 percent reduction in greenhouse gas emissions.

But the ETS is not seen as effective due to a high number of permits available on the market.

Earlier on Thursday (16 October) German chancellor Angela Merkel said that although government leaders will try to reach an agreement next week, “it is unclear” if they will be able to.

“Those who know Europe, know how important it is to be patient”, she said.