High-Level Structural Dialogue on Connected and Automated Driving in Amsterdam

Secretary General, Mrs Sigrid de Vries attended the informal dialogue to discuss matters on connected and automated driving. The High-Level meeting took place in Amsterdam on the 15th of February 2017. The overall goal of the meetings is to work towards a coherent European framework for the deployment of interoperable connected and automated driving, which should be available by 2019. Germany will host the next High-Level meeting in the late summer of 2017. Sweden and Spain have also expressed their interest in hosting the meetings.

The participating Member States, the EC and the industry conclude that the developments on conned and automated driving have accelerated further since the declaration of Amsterdam. It was concluded that in order to be ready for the deployment of connected and automated driving in 2019 the execution of the action in the Declaration should also have to be accelerated. Member states also agreed to cooperate more intensely on actions that need to be executed on a national level. 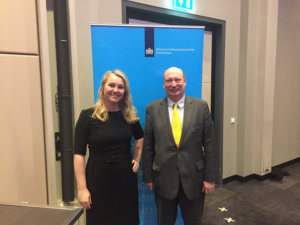 Minister of Infrastructure and the Environment, Melanie Schultz van Haegen with the Director-General for Mobility and Transport Mr Henrik Hololei.