The European Automotive Suppliers’ In-dustry represented by CLEPA is closely following the ongoing developments in the United Kingdom (UK) and between the UK government and the European Union (EU) on the UK’s withdrawal from the EU.

Given the importance of trade in goods (and services) within the Single Market and specifically the relevance of UK im-ports and exports for the Automotive Suppliers Industry, we would like to make some recommendations on a future trade relationship between the EU and the UK for the consideration of policy makers

Uncertainty is a key concern for business

Two years after the Brexit referendum, and after more than a year of negotiations between the United Kingdom and the European Union, significant uncertainty remains for the industry. While the two partners have agreed in principle on a transition period from the UK’s formal exit date until December 2020, there is still no clearly defined, jointly approved vision for the future EU-UK economic and trade relationship beyond that date. A survey of our membership identifies this uncertainty as a key concern for business.

The automotive suppliers’ industry relies on frictionless trade between the UK and the rest of the EU and is therefore in urgent need of clarity with regards to potential changes to the current framework to implement strategic business decisions. We are concerned that there is only a short window of opportunity to negotiate and implement any agreement on trade.

A stable and predictable overall framework is crucial for investment and trade, specifically for a highly trade intensive industry like ours. In light of the most recent developments in the Brexit negotiations, we would like to the following requests and priorities for the European automotive industry to be considered by the British government and the EU:

The combination of customs union and the single market allows for full and unrestricted trade in goods and services for the EU and the UK automotive industry with no formal customs procedures or unnecessary stops or checks at the border. Automotive businesses benefit from tariff-free access to the UK market and this should continue without disruption in the transition to a new relationship between the EU and the UK. It is vital that both partners work with the industry to assess how single market and customs union arrangements could maintain these benefits and ensure a total absence of tariff and non-tariff barriers, as well as a frictionless and easy flow of goods across borders.

The customs union allows content to be cumulated for the purposes of rules of origin, which, in turn, gives UK automotive access to preferential tariff rates with numerous countries with whom the EU has a free trade agreement. Therefore, the European automotive industry calls upon the EU institutions and the UK government to provide continuity of market access to third countries and to maintain trading benefits from existing and potential future agreements across Europe.

The EU and the UK benefit from a system of harmonised and shared regulation concerning the automotive industry. Therefore, the establishment of regulatory continuity to avoid a divergence of EU standards is crucial under the European type approval system.

There are a number of important areas in which the EU and the UK should prioritise continuity in a shared regulatory framework:

Collaboration between the UK, EU, and Member States on shared priorities including emissions, renewable energy, and connected and automated driving should continue, with the UK seen as a strategic partner. Continued collaboration on these projects should be supported by UK funding in addition to the existing EU funding framework.

There is a wealth of talent in our industry and automotive companies must continue to access the pool of talent in the EU to maintain competitiveness, meet their skills needs and foster economic growth and innovation. Therefore, we encourage efforts to maintain the free mobility of labour between the EU and UK.

The automotive industry and the Single Market

Today, European automotive suppliers lead the world in the design, engineering and manufacturing of key vehicle components and systems technologies. A crucial factor behind this has been the success of the Single Market and the positive benefits of European Union membership.

The European automotive sector employs more than 12 million people, produces a quarter of the world’s vehicles each year and represents more than 6% of the EU’s GDP.

The UK is one of Europe’s top automotive manufacturing countries, and plays an important role for this sector, with manufacturers and suppliers highly integrated across Europe. Between 2010 and 2016, UK car production increased by 5.9% per year on average, up to 1.7 million cars in 2016. However, in 2017, production decreased by 3%, certainly linked to the economic uncertainties created by Brexit.

In 2017, 80% of UK car production was exported, with the majority (54%) to the EU, way ahead of any other market (the US came second with 16%). The UK is also the EU’s second largest car market. In 2016, the UK imported more than 2.4 million cars, 82% of which came from other EU Member States. Taking these figures into account, it is clear that the automotive sector will be highly affected by the outcome of the Brexit negotiations.

Our goal is to build upon the success story of recent years and minimise the impact on our industry of the UK leaving the European Union. The Single Market is fundamental to the growth of the European automotive industry and it will remain a key priority for CLEPA to maintain and strengthen it to the benefit of all its members. 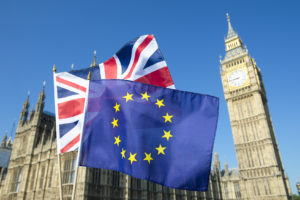 ○ Some 12 million people are employed in the European automotive industry

○ European automotive suppliers invest over €22bn in RDI per year. They are the biggest private investor into research and innovation

○ Per year, 18 million vehicles are manufactured in Europe, contributing to the stability and growth of the European economy