What you will find in this edition

A slightly improved third quarter gives automotive suppliers a bit of breathing room, after four consecutive quarters of falling profitability. The supply industry’s revenue has experienced strong year-on-year growth from July to September 2022, as production was less impacted by semiconductor and material shortages. Nevertheless, sales remain 5% below the levels recorded over the same period in 2019. Better vehicle production levels — aided by production backlogs from previous years — has helped in this regard. However, cost pressures continue to weigh on suppliers, allowing for only a slightly improved profitability outlook compared to one year ago.

CLEPA’s latest analysis of investment and trade data shows a mixed picture. The development of a European battery supply chain continues to attract foreign direct investment (FDI), but generous battery production subsidies in the US will represent a serious test. Significant growth of imports from China and Turkey is starting to eat into the sector’s traditionally large trade surplus adding to concerns that energy prices are undermining Europe’s competitiveness. Over the past three years, the EU’s quarterly trade surplus with China has fallen from €1.6 billion to €0.9 billion.

The third quarter of 2022 provided suppliers some respite after a difficult first half of the year, even if cost pressures continue to weigh on profitability. The EU continues to attract foreign direct investment, but a significant growth of imports points at a crack in our competitiveness.

Automotive suppliers’ revenues were up 8% over the third quarter of 2022 compared to the prior year, adjusted for inflation. Nevertheless, revenues remain 5% below the levels recorded in the same quarter in 2019, before the outbreak of the pandemic. Revenues over the first nine months of 2022 are 0.5% above the revenues in the same period last year. The gross operating margin stood at 10.2% over the first nine months of 2022, 1.4 percentage points below the level recorded in 2019, illustrating how that profitability remains a concern. 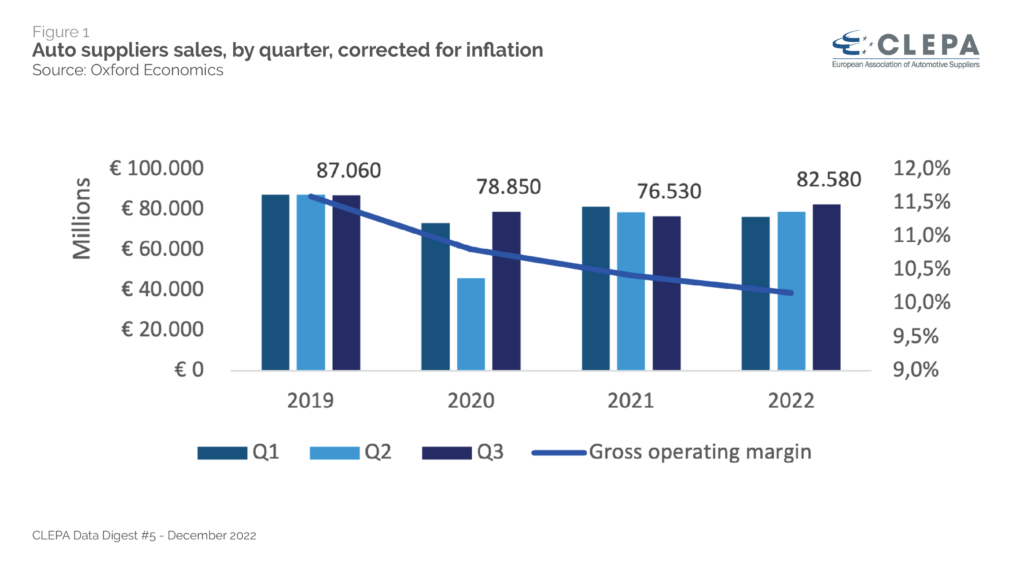 Q3 2021 had the biggest supply chain disruption due to chips shortages, with production being down almost 20% YOY, to 16.6 million vehicles globally. In Q3 2022, 21.2 million vehicles were produced globally, relativising the strong year-on-year growth.

Easing of supply chain disruptions (in particular, better availability of semiconductor chips) resulted in an improvement of average operational profitability (EBIT) by 0.8 percentage points to 5.7%, based on an analysis of the financial results of the 18 biggest suppliers to Europe. Over Q3 2022, nine suppliers recorded operational profitability below 5%, a profit level that in the long run could erode a company’s ability to maintain investments. 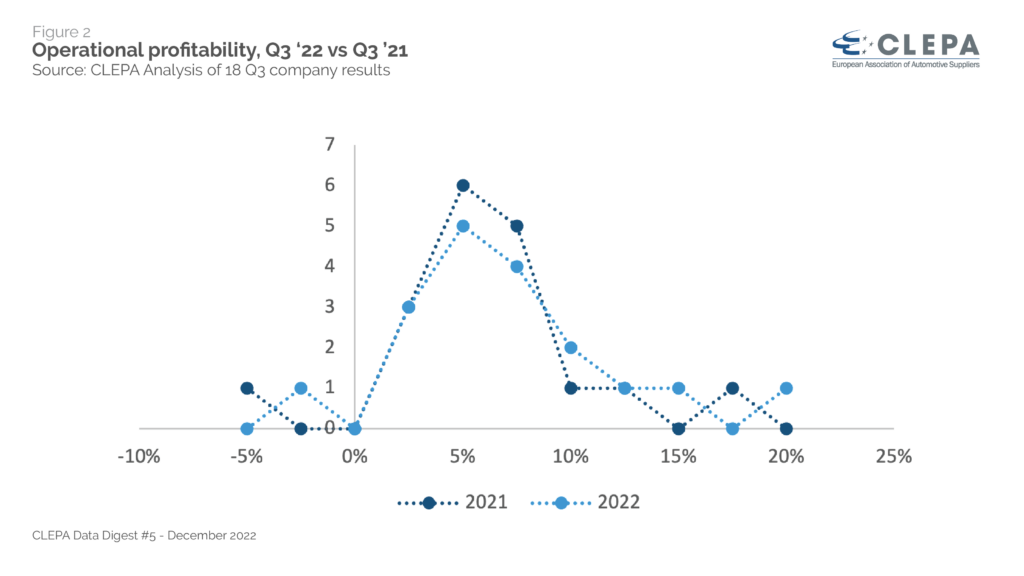 CATL’s announcement to invest €7.1 billion to build a plant for battery cells and modules in Hungary lifted automotive supply foreign direct investment (FDI) to a new quarterly record. Excluding battery investment, the automotive supply industry recorded €0.3 billion of investment over the third quarter of 2022, a decrease of 61% compared to the same period last year. Projects mostly targeted power electronics and electric components. Over the first nine months of 2022, non-battery FDI increased by 31% year-on-year. 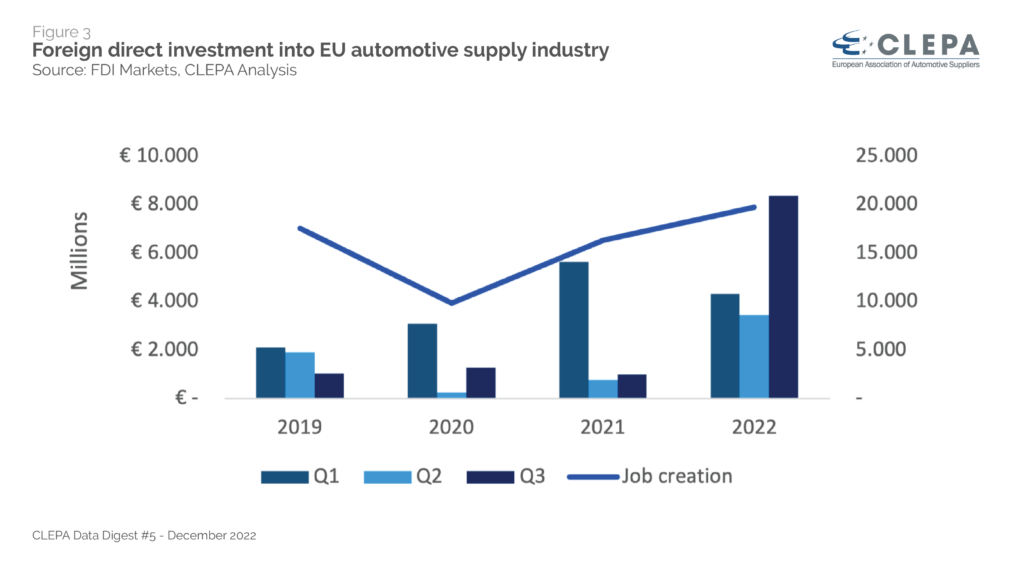 4 – Component imports from China and Turkey continue to increase

Automotive suppliers exported €13.3 billion in automotive components in the third quarter of 2022, recording a moderate 2.2% growth compared to the same period in 2021. Gearboxes and parts thereof remain, in terms of value, the most important export product representing 24% of the total exports in components. Combustion engine specific components represented 37% of the EU’s exports, up from 35% in the same period in the prior year.

The moderate export growth is in striking contrast to significant growth of imports. The EU imported €7 billion in automotive components, recording a 28% growth compared to the same period in the prior year. Imports from the EU’s biggest sourcing markets for parts, China and Turkey, grew by 49% and 43%, respectively. It is part of a rebalancing of the EU-China trade relationship, with imports 86% higher than pre-COVID, while exports have expanded by a marginal 2.4%. The import figures do not consider battery cells and processed materials, highlighting that automotive import growth from China is likely underestimated. 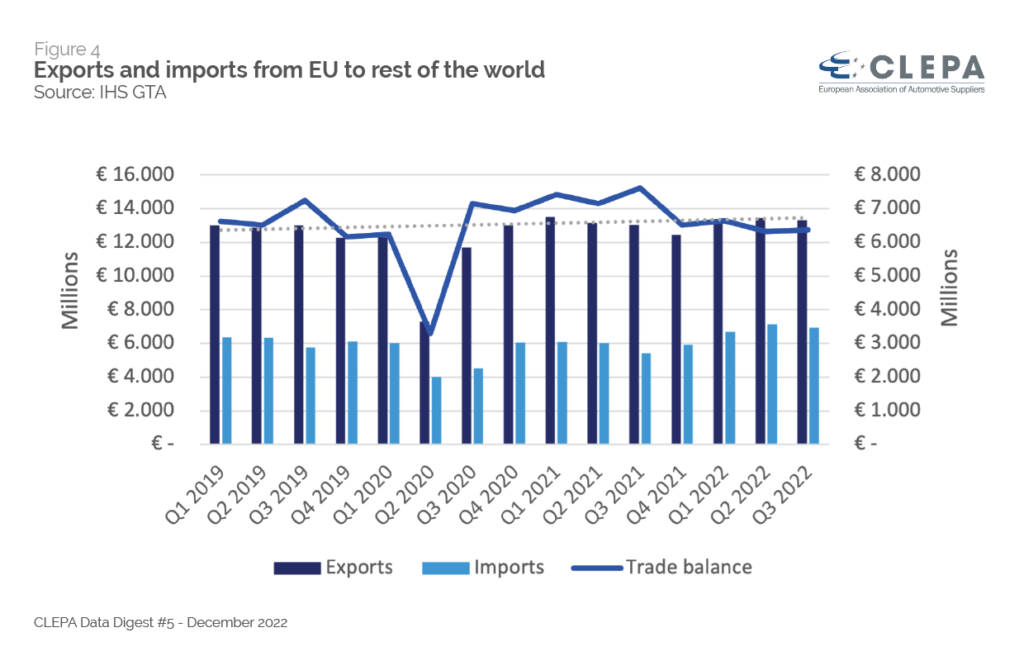 A broader assessment of the financial health of automotive suppliers by Strategy& suggests that 61% of automotive suppliers were in financial distress at the start of the third quarter. The analysis considers how a company’s profitability, availability of cash and equity compare to a company’s debt structure and interest commitments. The slightly better results of the third quarter are likely to generate a certain improvement, but will most likely will not change the fact that more than one in every two suppliers will find themselves in a financially vulnerable situation. 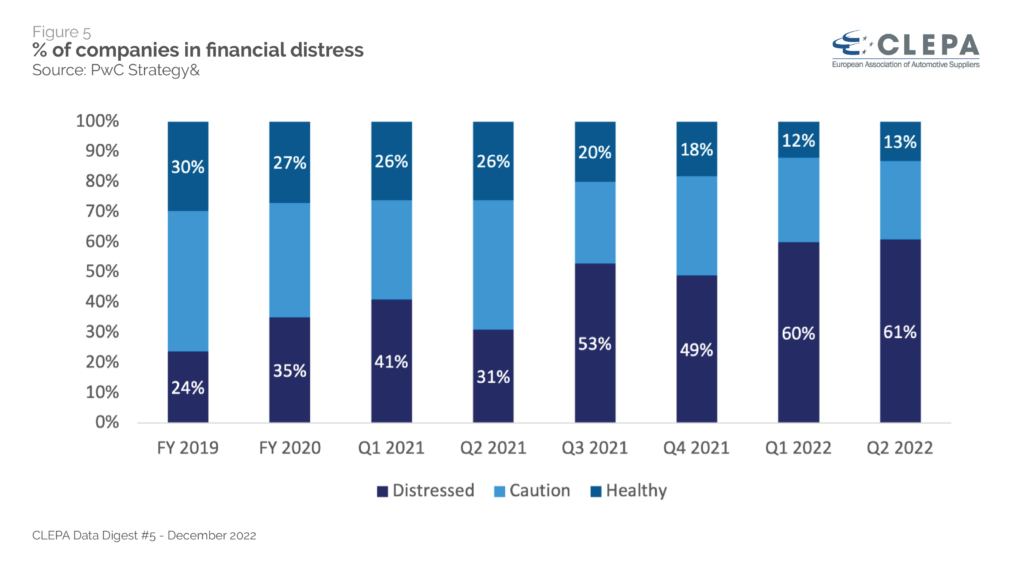 Despite a modest profitability recovery in Q3, recent data on component imports and financial distress remain alarming. The industry’s return to healthy profitability is key to continued investments in the mobility transition.