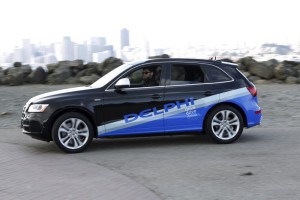 European automotive suppliers and automakers are working together to develop self-driving car technology. Several suppliers – notably Delphi Automotive and Bosch – are among the more popular technology partners with multiple alliances around the globe. Some companies, such as Tesla Motors, General Motors and Ford Motor, are trying to develop proprietary driverless systems, a larger group of automakers appears to have decided it makes more sense to develop self-driving technology in collaboration with suppliers.

The Delphi-Mobileye alliance involves a turn-key system that the partners plan to offer to smaller automakers that lack the resources to develop such systems on their own. It will be ready for production by 2019, said Jeff Owens, Delphi’s chief technology officer. Dirk Hoheisel, the member of Bosch’s board of management who oversees autonomous driving said: “We want to work with others to develop a standard platform and open standards for self-driving systems, especially around data and mapping.”