Forum for Mobility: Road transport in the EU. Are we going in the right direction? 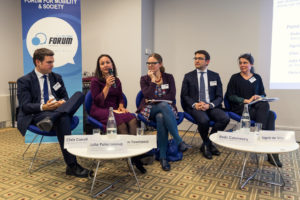 EU decision-makers and stakeholders gathered to discuss whether the EU is going in the right direction on road transport and what actions needs to be taken by the European Institutions to improve mobility.

The event took place just over a month before the European Elections and included speeches from MEPs (and co-chairs of the Forum) Dominique Riquet (RO, ALDE), Adina-Ioana Valean (RO, ALDE) and Bernd Lange (DE, S&D).

All the MEPs recognised many of the benefits of existing EU policy but also highlighted a number of ongoing challenges such as connectivity and automation that will require further efforts in the next EU term.

The event also included speeches from Elisabeth Werner, Director of Land Transport at DG MOVE of the European Commission and from Mircea Ionescu, Land Transport Attaché for the Romanian Presidency of the Council of the EU.

Ms. Werner said that the Commission has delivered on a number of issues over the past five years but agreed that further actions are necessary. Mr. Ionescu mentioned some of the ongoing legislative files and highlighted that the Romanian Presidency is keen to move ahead on many of the dossiers such as the General Vehicle Safety Regulation.

A panel debate involved Chris Carroll from FIA Region I, Julia Poliscanova from Transport & Environment, Ellen Townsend from ETSC, Radu Colonescu from Goodyear Europe and Sigrid de Vries from CLEPA. The stakeholders discussed several key issues including EU policy in the areas of innovation, research, e-mobility and the functioning of the European institutions.

The event took place at the Renaissance Brussels Hotel and attracted the attention of key decision-makers, industry representatives and civil society organisations.